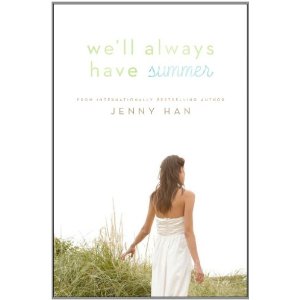 I discovered Jenny Han a little more than a year ago when I was reading four or five young adult novels a week and revising Cloud 9.  I found a book at the library called The Summer I Turned Pretty and even though I wasn't crazy about the title, the story seemed compelling.  Turns out the writing was good, too.  I read that book in a day and was pleasantly surprised a couple of months later to find a sequel, It's Not Summer Without You, at Barnes and Noble.  Another well-written, compelling story.  I've been waiting a year for the third and final book, wondering which brother Belly Conklin will end up loving forever.  Twenty-four hours after I downloaded We'll Always Have Summer onto my nook, I had the answer.

What I loved most about the first two books, however, is not as prevalent in the third.  The "Summer" books are love stories, but there's more to Belly Conklin than her obsession with her first love Conrad and her friendship with his younger brother, Jeremiah.  In the first two books, Belly deals with some pretty serious issues.  Her parents' divorce and its impact on her, her brother, and her mom.  Her relationship with her mother and her mother's best friend, Beck, who happens to be Conrad's and Jeremiah's mom.  Beck's death and how it changes everything familiar and true in their lives.

Many young adult novels are about love, but a deeper thread is important for many readers.  I enjoyed reading about Belly's struggle in We'll Always Have Summer, but I wish there had been more about her other relationships, especially with her mom.  I devour young adult novels because I write them, and I want to learn as much as I can from what's out there.  I'm learning a good lesson today as I think about the "Summer" books and my own work.

An agent who read the full manuscript of Cloud 9 (and rejected it) wrote, "In the end, I felt there was an imbalance between Cat's emotional life, and the resolution of her problems at home in Minneapolis came about too quickly."  I am honored that she took the time to give me specific feedback and have been going back into the manuscript to see if I can find and remedy those gaps.  Today I have new perspective.