Gone with the Wind Turns 75

I've often said that Gone with the Wind is my favorite book.

Normally I would read a book before watching the movie version, but not GWTW.  I saw the movie when I was three years old, shown on TV over two nights.  The story goes: I sat on my mom's lap, completely enthralled by Katie Scarlett O'Hara and Rhett Butler and their world, didn't say a word, didn't take my eyes from the TV as Scarlett threw the vase at Rhett, as Atlanta burned, as Scarlett pulled down Miss Ellen's portieres (yeah, that's a fancy word for curtains) to make a gown from them.

Mom kept a tattered paperback of the book in the living room. I don't know how many times she told me that it was fine for me to watch the movie, but I wasn't allowed to read the book.  I didn't understand why, except that it had a somewhat racy cover (for a fifth grader, anyway).  That the book was forbidden (and is still banned today) made it even more enticing.  I started waking up early on Saturday mornings, before anyone else in the house, to hide behind the big olive green armchair in the living room and read those delicious pages.

I fell in love with the story, the description, the characters, the depth of Margaret Mitchell's novel.  I lost myself in the words.  It was the longest book I'd ever read and I devoured every page.  I've read it nearly every summer (with one or two exceptions) since eighth grade, and it's about time for me to start it again.

It was also during junior high that I began collecting used copies of the book -- antique shops, used book sales, auctions.  My sisters found copies for me at Goodwill and garage sales.  My oldest copy is from 1937 but is missing the dust jacket. I still hope to someday stumble upon a signed first edition that someone unknowingly donated to the library for their book sale, since I don't have an extra $25,000 lying around.

Over the years I've collected posters, books about the film, various collectors editions of the film, figurines, mugs, puzzles, board games, et cetera, in addition to the books.  I used to be able to rattle off useless bits of trivia about the novel and film, but it seems that over the years I've lost much of that. 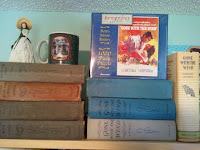 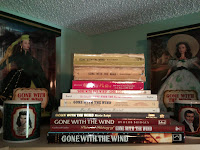 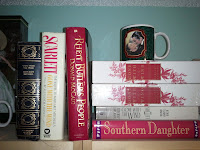 What is it about spoiled, pampered Scarlett O'Hara that intrigued me as a child?  I loved her sass, her determination, her spirit.  I loved that she spoke her mind, even if it wasn't proper for a lady.  I loved that gleam in her eye -- no matter what, Scarlett O'Hara was a survivor.  If she had to lie, steal, cheat, or kill to save herself and the people and places she loved, she would.  And she did.

Margaret Mitchell's characters are true and unforgettable.  As a writer I remind myself over and over that change must occur for my characters to grow, and that they must act, not just be acted upon for the change to occur.

Here's to you, Margaret Mitchell. 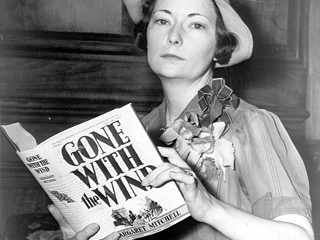