This week, I am the Rejectionista.

It’s been a Query Rollercoaster this week.  Since my February Re-Charge, I’ve been diligent about sending out queries.  Monday night after the kids went to bed, I sent three and on one got a request for a full within a half-hour.  Here’s my facebook status update for that moment: 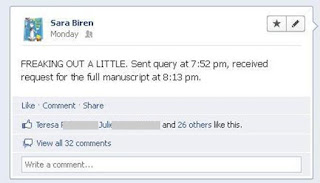 As fast as this particular agent was with the request, she was equally (and mercifully) speedy with her rejection, which I received yesterday at  11:39 am, approximately 39 hours after I sent her the manuscript.

During my lunch break, I sent out two more queries. Two hours later, I received a rejection from one of them.

And then – Maybe not.

The querying process is hard work – that’s no big secret and my experience is not unusual.   You put countless hours into your novel itself and then you have to try to compress it into one paragraph, a paragraph that is going to get an agent’s attention, whet their appetite, entice them to want to know your characters and devour their stories.  If you hit on the right one, they ask for more.  And it’s hard to hit on the right one, and your words, your novel, might not be enough for them.

This is a business.  It’s subjective, yes.  That agent may love your book, but he or she needs to be able to sell your book on more than love.  Marketability is critical, especially for a debut author.  I get it.  Even so, it’s devastating.

It’s a little like that scene in St. Elmo’s Fire when Jules loses it.  She’s sitting on the floor in her cold, empty, freezing apartment.  She lost her job, she’s a coke addict, her father hates her, her stepmonster is dying.  She’s a mess.  Billy tells her the story of St. Elmo’s Fire, tells her that no one was buying her together-woman-of-the-80s act.  She says,  “And all this time I was afraid you’d find out I wasn’t fabulous.”

So when I get the Big Rejections, I have a little pity party that typically lasts for four or five hours.  It may involve cake.  Yesterday’s was leftover from a Mardi Gras event.  Timely.   I mourn the loss of this particular dream.  I drink loads of coffee and gear up for the next round.

Because there is always a next round.  A wise man once told me that every no gets you closer to the yes.  Now, this was in relation to selling service plans back in my retail days, but the idea is the same.

Every no gets you closer to the yes.

There will be a yes.  Until that day, I continue to be the Rejectionista.  Rejected and fabulous.

How about you?  How do you handle Rejection?
Email Post