It's been a wild week of birthdays and illness and re-reading The Hunger Games trilogy.  Next week: meetings and taxes and hopefully lots of time for revisions. 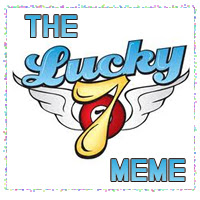 Earlier this month, Karina at Silver Linings tagged me for the Lucky 7 Meme.

Page 77 of my current MS, WAITING FOR THE SUN:

“We’re having kebabs,” she says.  “Surf and turf.  Steak, shrimp, I even threw in some teriyaki chicken.  Lots of veggies, too.  And for dessert – fruit kebabs.”
I can tell that my dad is trying hard not to frown.  There’s a plastic smile on his face that shows a lot of his bottom teeth.  It’s amusing, at least to me, that my dad rented our home to a family that is the polar opposite of his own.  Shay is a free spirit, she goes with the flow, she’s artsy – my dad is none of those things.  And I’m pretty sure that he’s never eaten a kebab in his life.
“I brought some beer,” he says to Shay and then coughs like he's got grilled vegetables stuck in his throat.  “You got a cooler down here?”
Shay nods and tips her head toward the stone half-wall.  The cooler must be hidden behind it, out of sight.  I would imagine she doesn’t want the ugly old cooler spoiling the effect.  She's drinking red wine from a goblet I recognize as one of the set from Mom and Dad's wedding.
Dad puts his six-pack into the cooler with a clink, keeping out one of the bottles for himself.  I set the pies on the table next to the pitchers of lemonade.
“Where’s Brie?” I ask.
Shay opens the lid of the grill to peek at her kebabs.  “I’m supposed to tell you she’s in the Bungalow, waiting for you.” 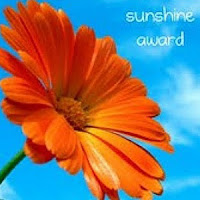 C.B. Wentworth tagged me for a Sunshine Award and I'm honored by and grateful for her kind words about my blog.  I, too, was awarded some Sunshine a few weeks back, so I'm going to break from tradition and post a clip from a movie.  For the rules of the Sunshine Award and to see my responses from the first award, click here.

My favorite scene in the movie shows the passage of time as William walks through the Portobello Market.

Here's the clip from the film, with what has become one of my favorite songs: "Ain't No Sunshine" by Bill Withers.  Which is sort of the opposite of what we're going for here with the Sunshine Award, but it's always the first song I think of when I think of sunshine.


Now that I've got that out of my system, here's the true bit of sunshine that I'd like to pass onto you today, with the wish that you have not turned from this world:

The Sun
by Mary Oliver

Have you ever seen
anything
in your life
more wonderful

than the way the sun,
every evening,
relaxed and easy,
floats toward the horizon

and into the clouds or the hills,
or the rumpled sea,
and is gone–
and how it slides again

out of the blackness,
every morning,
on the other side of the world,
like a red flower

streaming upward on its heavenly oils,
say, on a morning in early summer,
at its perfect imperial distance–
and have you ever felt for anything
such wild love–
do you think there is anywhere, in any language,
a word billowing enough
for the pleasure

that fills you,
as the sun
reaches out,
as it warms you

as you stand there,
empty-handed–
or have you too
turned from this world–

or have you too
gone crazy
for power,
for things?

Lora Palmer awarded me The Versatile Blogger Award.  Thank you!  Here are the rules: 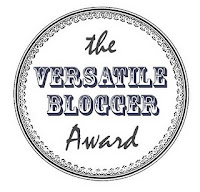 1. I've had the Hunger Games soundtrack on repeat since Monday.
2. I am not a Maroon 5 fan, but I LOVE "Come Away to the Water" from the Hunger Games soundtrack.
3. My favorite song on the Hunger Games soundtrack is "Kingdom Come" by the Civil Wars.
4. I collect and covet old typewriters.
5. I name my vehicles.  My first car was a red Pontiac Sunbird sedan named Scarlett O'Hara.  For some reason my brother also drove this car for a short time and he called it Bob from Account Temps.  My next vehicle was a blue Pontiac Sunbird coupe named Spartacus (inspired by the movie That Thing You Do!).  I loved my Sunbirds.  Just before I got married, I let Spartacus go and purchased a lovely silver-blue Saturn L200 named Simon Lebon.  Two years ago I got a white Saturn Vue called Veronica (a song by Elvis Costello).  I love my Saturns.  My husband also names his vehicles, which was one of the reasons I fell in love with him on our first date.
6. I fell in love with my husband on our first date -- for many reasons.  I knew he was the one.
7. There are, at present, 5,777 emails in my in-box.  I really need to do something about that.

So, because if I were to go ahead and tag as the rules state, I would need to tag a LOT of bloggers, I'm going to proceed with SEVEN.  Feel free to pick one of the awards and knock yourself out!

Three of the awards go to fellow members of the MNYA Writers group:
Ryann Kerekes at Novel Addiction
Liz Hellebuyck at That's What Liz Said
RJ Rugroden at Fiction Technician

Other fantastic blogs:
Krista McLaughlin at The Jellybeans of Writing
Jaime Morrow - Reader, Writer, Nerd
Laurie Dennison at Unavoidable Awkwardness
Stephanie Scott at A Girl and Her Diary

And now, please excuse me while I watch Notting Hill.
Email Post