"None of us can predict when death will arrive, but we can do something about how we use the days we have." --  Bengt Eidem, Regine's Book

Today I am blogging for Regine.

I'm honored to be a part of Zest Books' blog tour for REGINE'S BOOK: A TEEN GIRL'S LAST WORDS.  Be sure to check out my friend Erin's blog tomorrow for the final stop on the tour and the other fine bloggers who participated.


Regine’s Book: A Teen Girl’s Last Words, new from Zest Books, is Regine’s personal story as it was written on her blog and features her own photography and artwork, as well as comments from blog readers and entries from those who loved her most. The book deals with every facet of living with cancer, from the good days to the bad and everything in between. At an age when Regine’s biggest concern should have been what dress she was going to wear to prom, she was worrying about whether or not the wig she wears looks natural and about all the things she may soon be leaving behind. “The fear of no longer existing never goes away,” Regine confesses only a few months before her death. “I’m afraid to leave the world and I don’t want to do it. I think about my family, and about my friends. I have to fight for them. I can’t leave them behind with that sorrow. I have to try everything I can, despite how bleak everything looks.”


Honestly, this was a tough book to read, but I knew that going in.  Anyone who has been personally affected by cancer -- or any terminal illness -- might feel that way.  Regine's story hit me in a couple of ways -- both as a child who lost a parent to cancer and as parent myself.  I cannot imagine the anguish of seeing your child wage war against such a disease.  This has hit especially close to home over the last two, almost three years, as a dear friend from college and her family have faced such a challenge as they waited for a donor heart for their son and have dealt with many complications since then.

So.  Where to begin?  This book has touched me in so many ways.  It's 2:12 am on Thursday, December 6th and I've just finished the last 100 pages or so of Regine's Book.  My face is still damp with tears.  I've been crying since page 284, especially while reading her mother's comments at the end of the book.  Regine's story -- her blog posts, poems, photographs, diary entries, responses to comments left on her blog -- is so genuine, so emotional, so raw.  Through her honest entries, I feel like I really got to know who she was as a person, not just a girl with cancer. And I am mourning her now.

Regine was wise beyond her years and she was brave enough to share her journey and innermost thoughts with the world through her blog. That's one thing that has really stood out for me about this book -- the role of social media in our daily lives and the ease with which we are able to connect with others all over the world.  Regine's outlet was her blog and someone created a facebook page, which is still active three years after her death.  Regine's story continues to influence and inspire people the world over.

When my father was diagnosed with cancer in early 2006, the thought of publicly documenting his fight never once crossed my mind -- or that of anyone else in my family.  I had just started a blog to record our life as a family, which at the time was me, my husband, and our three-year-old son.  Our daughter would come along the following  year.  When I look back on the entries from 2006, not once did I mention that my dad was sick.  There are a few references to family gatherings, a post to wish my dad a happy birthday in September, and that's it.  In December, I wrote that we were getting our routine back to "normal" a couple of weeks after his funeral.  It would take me a long time and a new blog to write about my dad and his illness.  We didn't even have a Caringbridge site, which so many families rely upon to share information quickly and to many people.  His rather short battle with cancer was a private one, shared only with family and a few close friends.

Regine did not blog or share her story to seek attention or pity.  Her intention was to inspire others to go out and live their lives and to help others.  What struck me as disheartening were the many comments from people who did not understand that and left horrible, hurtful comments on her posts.  One unkind person even wrote, "When will you die? -- J," to which Regine (awesomely) responded: "J: are you a total shithead or what?"  My heart ached for the poor girl, who was dealing with severe illness and pain and facing her own mortality, and still had to deal with people like that.

While reading REGINE'S BOOK, I highlighted and dog-eared numerous pages and passages as Regine implored her readers to face their fears, to be satisfied with their lives, and to go out and live.  There are too many of these highlighted passages to list here, but one in particular stood out for me -- a comment on her blog from a reader named Helle:


"The meaning of life is contained in people just like you, Regine.  What you give to so many people is what makes you immortal.  You're making an impact.  That's why it isn't a question of time.  Of course you want to do everything you want to do.  Of course you want to live.  But even if your life isn't as long as an old woman's, it's still a whole life.  With your fantastic blog, with your wisdom, openness, and the strength that you share with us all, you have accomplished more than many people can dream of.  I hope and believe you will make it, and get well."

Even if your life isn't as long as an old woman's, it's still a whole life.

Isn't that what it's all about?  That we're given just one life, and no matter how long or short that life may be, we must strive for a whole life.  It brings to mind one of my favorite quotes, from a poem by Mary Oliver:


Tell me, what is it you plan to do/ with your one wild and precious life?

This book provided a great deal of perspective for me, something that's happened frequently over the years but some days it's harder than others to remember.  My problems are miniscule.  My bad days are nothing.  Should it bother me that this morning my daughter asked for the millionth time if she could bring a doll to school and for the millionth time I said "no?"  Of course it shouldn't.  But it does -- I'm only human.  Regine's story pulled me back a little.  Next time Birdy asks about the doll (and she will), how will I react?  I will remember Luke's mother, who lost her child to cancer, and my friend Jody, who is thankful for every day that she has with Ethan, and I will remember Regine's mother, who watched her daughter slip away.

And I will go out and live my life.  I will teach my children to do the same.

Thank you, Erin, for suggesting I read this book and join this blog tour.  Thank you, Zest Books, for publishing such an important book and for working so hard to get Regine's story into our hands and our hearts, and thank you for your donation to The Leukemia and Lymphoma Society Team in Training in Regine’s honor upon publication of Regine’s Book.

Please leave a comment below to enter to win your own copy of REGINE'S BOOK, courtesy of Zest Books, as well as a bookmark and poster.

The winner will be announced and contacted on Monday, December 10. 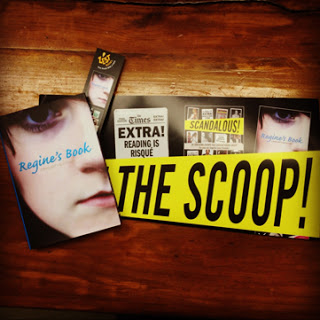 And tell me, what is it you plan to do with your one wild and precious life?  Don't wait.