My son has been in Cub Scouts since he was in first grade. Hammer Guy had been in Scouts, and his dad before him. Hammer Guy is the Den Leader as his dad was before him, and his grandmother before them. So Hammer Guy and Toad had their thing and went to Scub Scouts (as Birdy called it) a couple of times a month and Birdy and I stayed home and did our own special things, like book picnics, card games, or watching Sprout (usually not allowed on school nights).

About two years ago when I started my current job, I decided to help HG out with some of his Den organization – emailing parents, helping plan meetings. A month or so later, the Pack Committee asked me to help with Awards and Advancement. At some point, I became the Assistant Den Leader. And then the Pack Recruitment Chair.

How did this HAPPEN?
I ask myself this question frequently, especially during those busy times that I’m also coordinating the Book Fair volunteers for the PTO (like the last several weeks).

It will all be over soon. Toad will (hopefully) earn his Arrow of Light in February and cross over to Boy Scouts in March.

In the meantime, we’re frantically working on requirements for that Arrow of Light, the highest Award a Cub Scout can earn.

Last Sunday I scheduled a hike for the Den. We live in a far outer-ring suburb of the Twin Cities, so far that we’re still quite rural. Our neighborhood is surrounded by farm fields. The stars shine brightly in the night sky and in September we could see – faintly – streaks of the Northern Lights. We live a short distance from the Crow River and a nearby park reserve, 2600 acres of trails, woods, lakes, and restored prairie.

The weather cooperated – it was chilly and breezy, but the rain held off and the kids wore layers. The hikers included three Scouts and three parents, including myself, and although I had planned which trail we would follow, it didn’t quite work out that way. We let the Scouts use the map, trail signs, and their compasses to determine the path, and we got slightly off course.

In order to reach our final destination, we needed to follow the trail along the river, which had not been included in the original plan.

This was our reward: 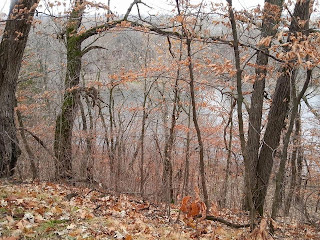 A gorgeous late-autumn view of the Crow River along a steep, tree-lined cliff, with part of our small town visible on the other side. There’s a small bench here and a picnic table, and I know that we’ll return here as a family next summer.

Maybe we would have come to this park someday, but honestly? I grew up ten miles from here and we moved back 11 years ago. I haven’t been to Crow Hassan Park Reserve since a sixth grade school field trip.

So maybe we would have missed it altogether.

It’s okay to let go of the map, to make room for mistakes or missteps or unexpected detours.

Let yourself get lost once in a while. Take a chance. Go in the opposite direction of what’s expected or planned.

It might be a struggle – it might add a couple of extra miles or months to your journey – but in the end, it will be worth it. Even if you don’t end up with a gorgeous view or something spectacular, you will have learned something along the way.

I’m still trying to navigate my way out of an unexpected detour in my journey. The year is not ending the way I’d planned or expected. I'm still waiting to see what will happen. But I have to believe that it will be worth it in the end. I’ll get my amazing, inspiring view.

Have you ever gotten serendipitously off course?