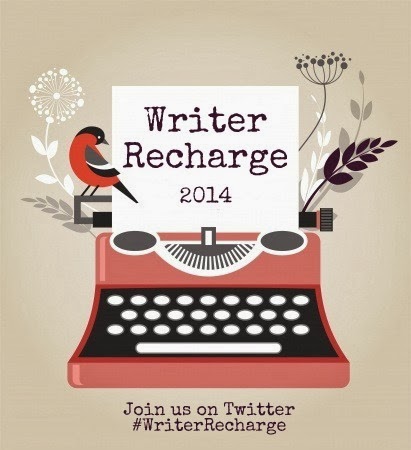 Hello and welcome to my first Writer Recharge update! Find more details HERE about this month-long motivational writing challenge co-hosted by me and Katy Upperman, Alison Miller, Liz Parker, and Elodie Nowodazkij. And be sure to include the link to your update below or tweet about it using hashtag #Writer Recharge!

First of all, THANK YOU to all of the writers from around the world joining us this month. I'm thrilled to see so many of you here and on twitter, cheering one another on. Your enthusiasm and productivity has been an inspiration to me and the other hosts.

Did I write every day? Yes, I did. There were a couple of days when I was only able to dash off a few lines right before bed, but I did write. And I made a lot of progress on KEYS over the weekend. I also finished up a beta-read/edit of a fantastic YA fantasy by Rebekah Faubion.

Did I reclaim my lunch break? Heck yes, I did. I mainly worked on edits.

Did I make progress on my goal to finish KEYS? Yes. Not as much as I would have liked, but it is progress nonetheless.

This weeks goal's include more of the same and work on a highly-anticipated client edit as well.

I'm so excited for this Recharge and for this WIP, I'm even going to share a little bit. This is from KEYS, in which a former hockey-playing metalhead goes to Florida to visit friends over spring break. She finally comes to terms with the changes that have occurred for her family since a terrible accident injured her brother - and with her feelings for one of her brother's best friends.

Alumni Night
Of course Dad makes it to Alumni Night. He skipped out on Thanksgiving, spent Christmas in the Bahamas with Brandy, and who knows where he was for New Year’s. But Alumni Night – now that’s something he would never miss. His history with Halcyon Lake Youth Hockey is deep – State Championship when he was in high school, coaching Dom’s team at every level until high school, president of the Blue Line Club, enthusiastic promoter of all things hockey.
Father of the great Dominic “The Dominator” Delviss.
Tonight, Alumni Night, they will both be honored in front of a standing-room only crowd, Dad for his contributions to the program, even though he bailed after the divorce, and Dom for not dying in that crash.
I mean, isn’t that what this is about? Giving Dom an award for his perseverance and hard work, for keeping such a positive attitude, for believing that one day he would walk again?
Bullshit. It’s all bullshit.
All those CareJournal entries, that great human interest story of a broken boy in the fight of his life, never giving up? All bullshit.
And tonight, it’s all over Dom’s face. We're in the crowded lobby of the arena, there are three minutes left of the first period, and Dom just told me there's no way in hell he's going out there in front of all those people.
I want to shake him. I want to tell him to grow up, that there are people waiting to see him, that he needs to get a hold of himself and get over it. But I can’t. He doesn’t understand this. His needs are immediate, his world is in the space around him and only that. If he doesn’t want to go out on the ice, I can’t force it. I can’t make him.
But I try once more. “Please, Dom. Everyone is counting on you.”
That’s when I see Wes. Tall, strong, gorgeous Wes, Wes with those rich brown eyes, that spiky hair, that broad smile with the one dimple. The Wes I’ve seen a million times in my dreams since that night, but only there. That complete piece of shit.
And my heart shatters once again.
“Hey, buddy,” he says to Dom, and puts his arm around him.
What? I’m fuming, I can feel the heat rising to my cheeks. Who does he think he is, swooping in here like he hasn’t been ignoring Dom for the last five months? Like he didn’t just brush off the dust of our little town, our little problems, and leave us all behind when he went away to college?
Ignoring Dom, ignoring me.
And it all comes rushing back, how stupid I was the night of Morgan’s going away party.
Off limits.
Wes and Dom have moved to a corner of the lobby where it’s not as crowded, not as noisy. Dom’s shoulders have relaxed, his eyebrows are no longer knitted together. Whatever Wes has said to him seems to be helping.
“He’s great, isn’t he?”
I whip around to find out the owner of the silky voice behind me. I don’t know her. She’s tall, willowy, with chestnut hair that honest-to-God looks like it’s from a Pantene commercial. It shines, glows, reflects light. This girl’s hair actually brightens up the dismal, rundown, concrete lobby. The rest of her, however, is quite plain, not that it matters with that hair.
“Excuse me?” I say. I’m not sure she’s talking to me.
“Wes. He’s really great with Dom, isn’t he?” She smiles and it’s so genuine, so angelic, I almost feel a little sick to my stomach.
“I’m sorry,” I say, “do I know you?”
“Oh!” she says, and she reaches her hand toward me. “I’m Gillian Brooks. I’ve heard so much about you, Holland.”
I don't shake her hand. I tip my head and rack my memory for any mention of a shampoo model named Gillian Brooks.
Nothing.
She turns bright red. “Wes’s girlfriend?” She says the last word like it’s a question. A loaded question.
She’s heard so much about me. She obviously knows Dominic – although I don’t have the first clue how. And from whom has she heard so much about me? Dom or Wes?
“Ah,” I say, and the word catches in my throat a little. “I see.”
“Um,” she says, a look of confusion cutting across her features. “Wes mentioned we’d be here tonight, didn't he?”
I close my eyes. I have to make a choice here. Be a bitch or be nice to this girl, for Dom’s sake. Not Wesley’s.
I go with bitch.
“Look,” I snap, “I don’t know who you are or why you’re here, but what I really need to know is, how do you know my brother?”
It’s like she just solved some tricky algebraic equation or something. Her eyes grow big. “Oh,” she says, “Wes hasn’t mentioned me?” She looks past me, at the boys standing in the corner, and she frowns.
“Just tell me how you know Dom,” I say, my jaw set.


So, how did you do for your first week of #WriterRecharge?