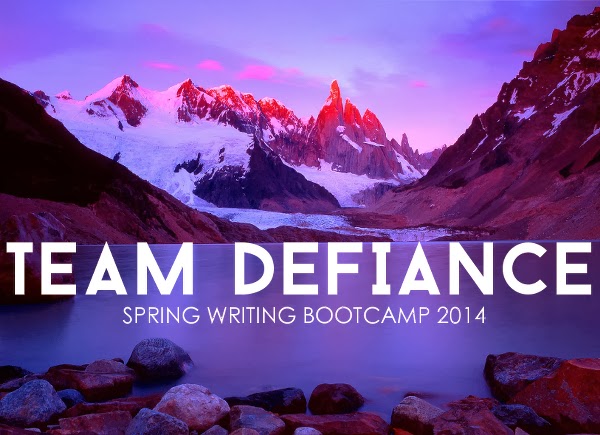 PATRICE CALDWELL
Patrice Caldwell lives in Boston for educational purposes and her home state is Texas… but let’s be real, she’s 100% Texan. She writes speculative fiction (MG, YA, and NA). Her stories range in every type of speculative fiction from light sci-fi, to high fantasy to portal fiction to contemporary fantasy; however, what links them all are strong themes about the importance of family, friends, and, of course, a dash of romance and magic! Patrice recently won the SCBWI student writer scholarship & got to go to the NYC Winter Conference. She is currently working on THE SUP FILES (Book One), an NA urban fantasy set in New Orleans.
Patrice LOVES baking and social media and traveling and books and and music and movies (especially Star Wars, The Hobbit, LOTR, Matrix...the books, too, for some of those), and TV shows (most recently Scandal, Lost Girl, Leverage, Game of Thrones).
Connect with Patrice!
Blog: whimsicallyours.com
Website: patricecaldwell.com
Facebook Page: https://www.facebook.com/whimsicallyours
Tumblr: http://whimsicallyours.tumblr.com/
Goodreads: https://www.goodreads.com/user/show/7251249-patrice-caldwell
Twitter:  @whimsicallyours
Pinterest (the best for character/world boards): http://www.pinterest.com/patrice93/

HELEN JAIN
Helen Jain lives in New York and is currently writing an untitled YA fantasy novel. She works as a freelance writer and writes about a variety of topics. She has also started a YA urban fantasy manuscript and would like to write non-fiction in the future.

Helen enjoys reading as much as writing and still likes comic books. Some of her interests include personal finance, investing, and debt repayment; fantasy; psychology; health and wellness. She is a hopeless romantic and is interested in foreign cultures and languages. She speaks some Japanese and and her attempts at Hindi give her husband a good laugh.

Tif Johnson lives in Kansas and writes contemporary (sweet) romance. She's published magazine articles and has won RWA chapter awards for her manuscripts. She's currently working on ONE ON ONE, a YA Hope Floats with a dash of The Prodigal Son and a hint of a treasure hunt. It's in major revisions before she sends it back out (again) to query.

Tif is the mom of four and an Army spouse (hence #5amwritersclub). She's a registered nurse. Her family moves every two years, and they are a year into Kansas and she loves it. These days she's a community volunteer. She loves to craft (though her time has dwindled to air) and cook (though she's not a foodie). Her favorite movie is Dirty Dancing.

Alison has been blessed with two incredibly awesome children and an incredibly supportive and amazing husband. She has the best jobs in the world – stay at home mom, writer, and part-time math tutor. She’s a huge fan of soccer, football, and anything Star Wars, is a most obnoxious fan of the Philadelphia Eagles, and she has a ridiculous collection of stuffed Eeyores.

Tracey Neithercott, from Massachusetts, is a magazine journalist for a living and a yet-unpublished YA writer. She’s working on a YA sci-fi and hopes to query by the end of this bootcamp. She’s a big health food nut and crazed Fringe fan.

Liz Parker lives in Nashville. Liz writes YA, mostly fantasy, though she’s toying with horror as well as historical fiction (non-fantasy). She also writes a lot outside of fiction, and works in PR for a living. Her current project is a YA fantasy set against the Civil War, and – possibly - a YA horror.
Liz has a Chiweenie named Frankie Chewbacca, and she adores him. She loves Star Wars and Harry Potter. She color-codes her notes. Sometimes she sleep talks; sometimes she sleep walks; and sometimes she sleep screams.

ADRIANNE RUSSELL
Adrianne Russell lives in the “Little Apple,” Manhattan, Kansas. She writes YA contemporary. The only criteria is that there must be kissing. She also writes for social media for work (Twitter, Facebook, blog, website) and maintains two personal blogs, Cabinet of Curiosities (for all things museum nerdy) and The Writers Republic (for all things writerrific).  Her WIP, PLEASE STAND BY, is a YA contemp currently undergoing an extreme makeover.

Adrianne loves road trips, reading books so good they make her want to rend her garments in jealousy, and debating best comic book villains (Dark Phoenix, naturally). She’s married to The Roommate, who doesn't blink an eye when she spontaneously breaks out in song, and she’s in service to two tuxedo cats, Dice and Domino.


SARA BIREN
Sara lives in Minnesota with her husband and two children. She writes YA contemporary, some of which has a touch of magical realism. She earned an MFA in creative writing from Mankato State University and has had several short stories published. Sara is represented by Steven Chudney of The Chudney Agency. She's currently working on a YA contemp (working title KEYS) that's filled with family drama, hockey, heavy metal, and heavy petting.

Sara works as a communications manager and freelance editor and volunteers for her kids' activities and schools. She loves the Beatles, Jane Austen, Star Wars, Harry Potter, the Buffalo Bills, hockey, and classic movies. She's a YA Buccaneers crew member.