Now that the New Year has arrived and I've had some time to reflect on 2014 (and write my "Suck it!" post), it's time to start thinking about my "resolutions" for 2015.

I don't really do resolutions, I guess, but I do set goals throughout the year. Last month, the YA Buccaneers challenged participants of the 12 Days of Books photo project to come up with their top 5 goals for 2015. Here are mine: 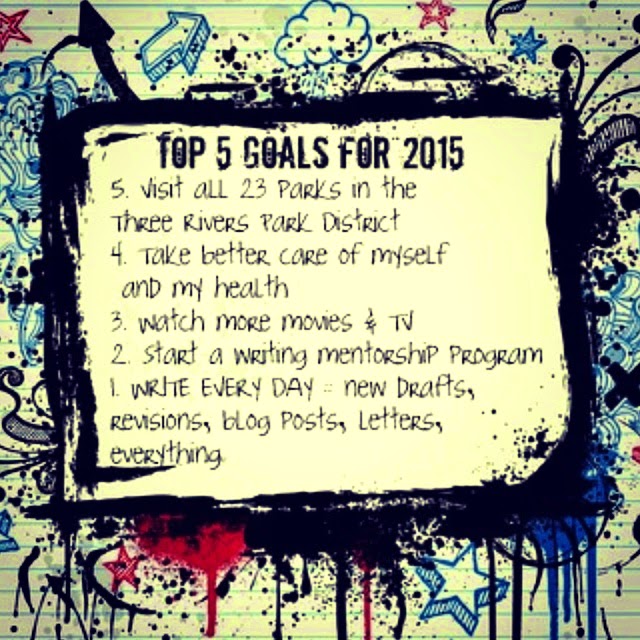 A couple of them are carried over from last year. About half-way through the year we started visiting parks in the Three Rivers Park District, all over the outer Twin Cities and suburbs. That's a lot of parks to hit, and while we made it to several, other events of the year made it difficult to make the time for it. So we'll try it again this year.

Number three is kind of funny - most people would say they need to cut back on movies and TV, but seriously, I just don't watch enough. I need to binge watch a couple of seasons of Downtown Abbey to get caught up, I've never watched Gilmore Girls or Friday Night Lights, and I've missed a lot of good movies since having children.

Last year I chose one word to focus on for the year: SHIFT. I've been trying to think of one for this year and I think I nailed it. Bonus, it comes from a song.

In 2015, I resolve to give more of myself. Now, I know that last year I joked that 2014 should be the Year of No, because I say yes to too many people, too many commitments, and I've gotten better at Not Saying Yes. But sometimes I feel like I'm not fully present. Maybe I'm not really listening when Toad is rambling on and on about new Marvel movies or when Birdy's reading out loud for school. Even though I read a lot of blogs each week, I'm not commenting enough to show my support. Sometimes I retreat to the Writing Cave and completely ignore the world around me (not a bad thing, and something I'm sure I'll still do, but...)

Part of it, I think, is focus. I'm an expert at multi-tasking, so when I'm helping Birdy with homework, I'm also sorting through the mail or responding to emails or making dinner. I'll have a conversation while scrolling through social media.

And I want to GIVE more to the writing community and the writers that have shown their support to me over the last few years. That's where the writing mentorship comes in. Again, stay tuned for more on that.

I'm not sure that I've completely explained what I mean by GIVE, but I'll end with the Song of the Year, which inspired my one word, You Get What You Give by New Radicals.