Winds of Hope and Memory

For days, I have tried to write this post.

For days, I have tried to process my feelings about the death of Jonathan Crombie, the actor who played Gilbert Blythe in the mid-80s production of Anne of Green Gables.

On Sunday, April 12, three days before he died, I saw a local production of Anne of Green Gables with my mom and two of my sisters. Here's a Facebook conversation that happened after: 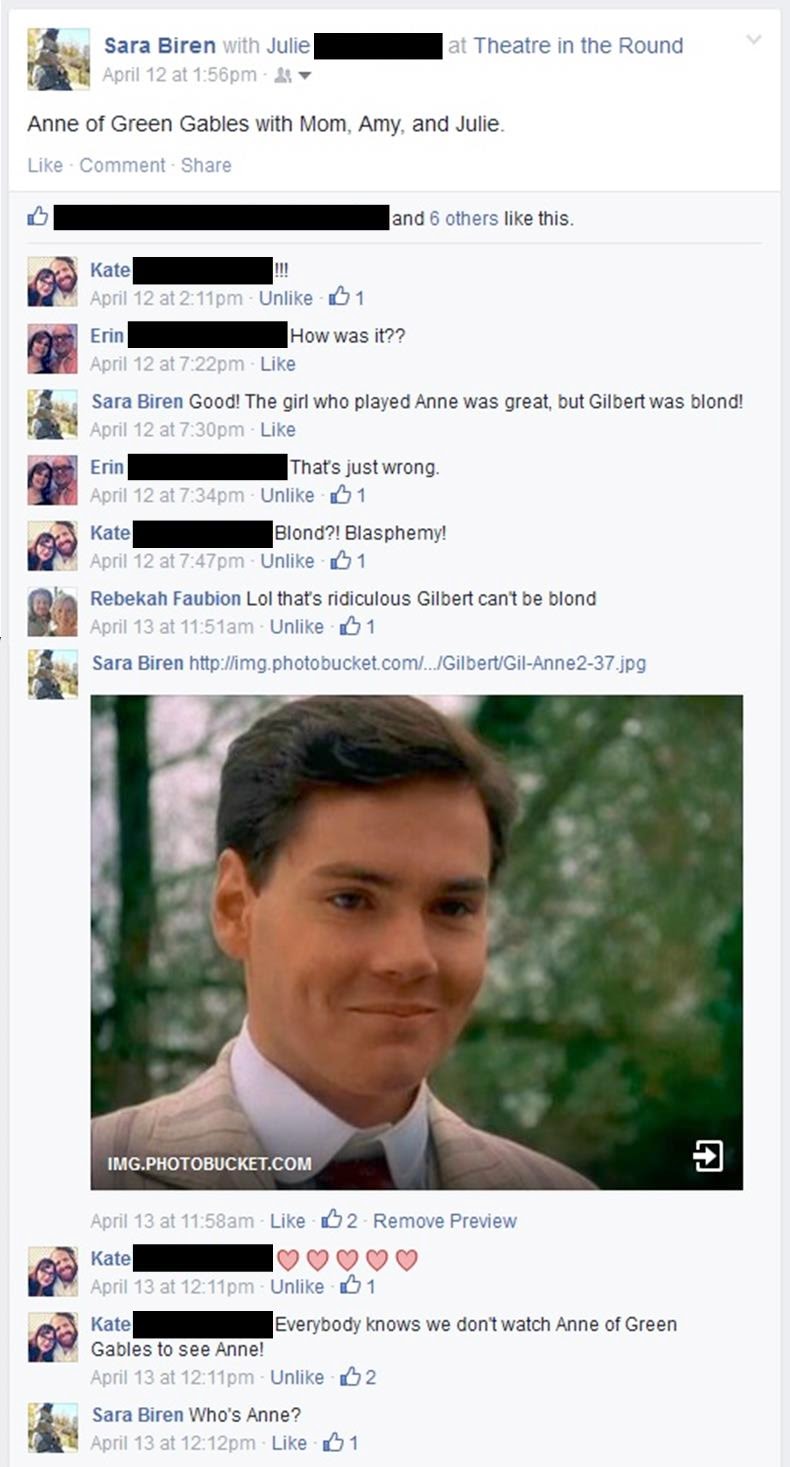 The first time I saw Anne of Green Gables, it was on my local PBS station on a show called Wonder Works. The Anne books were among my favorite childhood reads, Gilbert Blythe among my favorite "book boyfriends" (although the term did not yet exist, and he wasn't my first book boyfriend - that honor went to the Tall Dark Handsome Stranger, Tony Markham, from Maud Hart Lovelace's Heaven to Betsy). A feisty girl with a temper broke a slate over Gilbert's head and still he loved her, which gave this feisty girl with a temper hope.

I fell in love with Gilbert Blythe all over again as I watched Anne of Green Gables. Of course I did, and from the tributes I've seen on Twitter and read on blogs these last few days, I was far from the only one. Jonathan Crombie, in my young eyes, was the perfect actor to play Gilbert Blythe, with his dark curls, his teasing eyes. I still think so.

The world learned of Jonathan Crombie's death at age 48 over this past weekend. A little part of my heart shattered, the heart of the girl I was - the girl with a temper who loved to read and write and dreamed of someday finding a boy who would love her as much as Gilbert loved Anne.

In so many ways, you see, I am still that little girl who watched the familiar world of Avonlea come to life on her television. I've watched the Anne of Green Gables series countless times, with my mom and my sisters and my nieces and now my daughter. I've shared my love of Gilbert Blythe with friends. Over the years, I have found comfort and pure happiness in the pages of those books and from watching the series.

Saturday night, I watched Anne of Green Gables. Sunday, the first part of the sequel, and last night, part two of the sequel. I thought I would be able to keep it together.

I almost made it.

The two scenes that broke me: the first, after Gil has told Anne he's going to marry Christine and given her the note, she follows him to the train to thank him. He stands at the back of the train and calls, "Goodbye, Anne, goodbye."

And then, of course, this:

My eight-year-old daughter (who loves to watch with me) and I were talking about Jonathan Crombie Sunday morning. I told her that I was sad that the actor had died.

"It's okay, Mom," she said, and pointed to the DVDs. "We'll always have him here and in our hearts."

From Anne of the Island:

Gilbert drew her close to him and kissed her. Then they walked home together in the dusk... along winding paths fringed with the sweetest flowers that ever bloomed, and over haunted meadows where winds of hope and memory blew.