I still can't write that without my eyes filling with tears. I've thought about writing this post for a long time. I couldn't write anything when it happened, when she lost her valiant battle against the cancer that ravaged her body but not her positive spirit - never that. I told myself I would write about her a week later, then a month. Then two.

I met Karen at Best Buy, where I met a great deal of people who became fast and lifelong friends. Karen and I worked at different locations in the same department, as Media Supervisors, in charge of what was at that time the music, movies, video games, and software department (we even still sold cassettes back then!). We chatted on the phone occasionally for store-to-store transfers, but I didn't actually meet Karen until October of 1997 when we were both sent to a store in Madison to rescue the poor, overwhelmed Media sup who was drowning in product and planograms and didn't have the first clue where to start.

We stayed in a student housing suite on the University of Wisconsin campus along with two other Media Supervisors and a Media Senior Product Specialist. Funny story, that Media Senior (like an assistant supervisor) was from a store in Milwaukee and she happened to be dating MY FUTURE HUSBAND, which of course I did not know at the time. He came to visit her the same night that I went out to dinner with friends, so we missed each other and wouldn't meet until almost a year later when he moved to the Twin Cities.

Karen and I became instant friends, which is easy to do when you have a lot in common and can sort a 15-pallet pre-Christmas shuttle like lightning (sorry, I know this means nothing to the non-Best Buy among you). When you're sorting a couple thousand CDs into piles by category and artist, you have a lot of time to chat.

I have some great memories from that week in Madison. One night the group went out to dinner and stopped at a liquor store on the way back. Karen saw some felt UW coasters at the register and, thinking they were freebies, took a couple with her as a souvenir. They were actually a few bucks each. That earned her the nickname Coasta, and immediately after, I earned the nickname Surfa when I surfed a major curb down the block. (These nicknames were also a nod to Missy "Misdemeanor" Elliott, whose song "Supa Dupa Fly" was big at the time).

And so began the friendship of Coasta and Surfa. Eventually, I was promoted at my store and Karen moved over to take my spot in Media. At the time, Best Buy was conducting a survey about the employee experience. One of the questions was, "Do you have a best friend at work?" Karen and I had each other. We joked about it - Best Friend at Work became BFAW! BFAW! like the cackle of a bird. Timeless.

We worked closely together for several months before I moved to a brand new store and graduate school. She moved on, too, as a trainer for new stores. When I worked at the corporate office for a few months, she was my "buddy" and showed me around those first few days. I ended my career with Best Buy back at a store, and when the holidays rolled around and corporate employees were encouraged to help out at the retail level, Karen chose my store - Coasta and Surfa, together again.

After I left Best Buy, we stayed in touch with Christmas cards, but it wasn't until we were both on Facebook that we really connected again. By this time, she'd left Best Buy, too. She read an early draft of the very first novel I queried and was one of my biggest cheerleaders as I posted about my writing journey.

Karen was one of the most positive, enthusiastic, encouraging people I've ever met, always smiling, always laughing.


Last summer, I learned that Karen had cancer. She invited me to join a private group on Facebook where she shared updates, asked for help when she needed it, and for the most part, remained positive throughout what was to be her final, most challenging battle. She called us her Positivity Warriors.

Because Karen and I had a shared history that revolved around music, I started posting videos of familiar songs that had been played on "Best Buy Radio" - the in-store play - during our years together at the store. The very first, of course, was "Supa Dupa Fly." This became a daily habit - Monday through Friday, one of the first things I did at work was post a video with a memory or some sort of commentary. Eventually every week had a different theme - Barry Manilow Week. Cat Week. Paul McCartney Week. Soundtrack Week. Norway Week (Karen came from hearty Norwegian stock - Leif Garret, anyone?). Book Title Week. Weeks around holidays. Weeks of just Chris Cornell, because I love him (even though Karen did not - she very tactfully would say she did not understand the appeal). I did this for just over a year. It was my way of giving Karen a little piece of peace every weekday. I couldn't do much, but I could give her songs.

This summer, Karen's condition declined. Eventually she could no longer care for herself or stay at her home.

The week before our family vacation to Hayward, Wisconsin was Fleetwood Mac The Dance Week - all videos from the summer Best Buy presented the big Fleetwood Mac reunion tour. The last songs I posted for Karen were all from that live album, including this one: 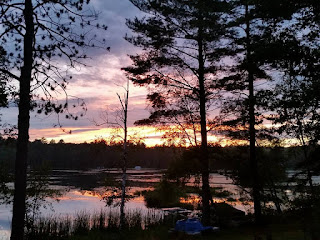 That night, I took a walk around the resort, grieving in the quiet and stillness of the evening, and was granted a beautiful sunset over Placid Lake, a message from my friend who no longer suffered.

The private Facebook group is still active. Her cousin posts photos of flowers - one of Karen's favorite things - every day. Her sister-in-law shares her memories of Karen and the grief of missing her. Occasionally I will post a photo or video or article about music that Karen would have liked. I've met very few of her Warriors in real life, but because they loved and supported Karen, they have all become friends. Karen's positivity will live on.

Hey Coasta, there's a new Chris Cornell album. I think you would have liked this one.